Technology Readiness Levels scale system was developed in late 1970-80’s by NASA to support planning of Space technologies. Since then, other organizations have adopted this system as a tool for decision making on RDI investments, adapting the level definitions to each organization’s needs. Currently, the European Union is using the TRL scale to analyse the RDI projects under the Horizon 2020 program. Nevertheless, due to the broad nature of projects under the H2020 programs and the unique definition for each level provided by EU (focusing on single technologies), it is complicated to fit a system gathering several technologies, as GRAVI3 is, in that EU scale. The GRAVI3 technology position on the TRL scale has been therefore made not only considering the EU definition but also considering other definitions such as NASA, US Department of Defense (DoD) and Department of Energy (DOE), the European Association of Research and Technology Organisations (EARTO), and others.

GRAVI3 technology (as a foundation for offshore wind turbines) is at TRL 5, but several important features have already been demonstrated full scale in real operational conditions, concretely via the met mast projects which are described above. Components which are integrating the Gravi3 concept were proved in 2014 when the first two self-buoyant GBS supporting meteorological masts were installed in Scottish waters at OWF participated by EDPR. Moray Firth OMM video.. Inch Cape OMM video. 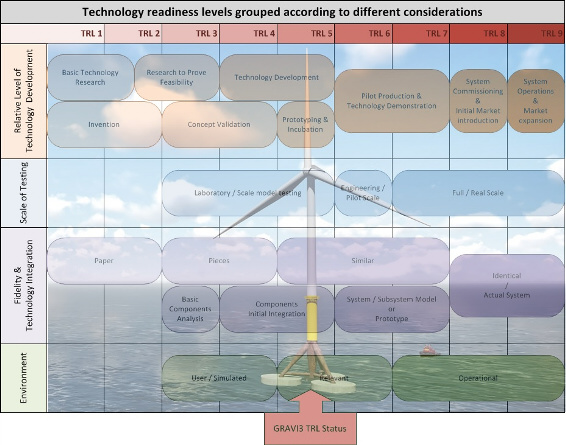